2 An Overview of Baby Git

As mentioned in Chapter 1, Baby Git is a rudimentary version of the Git version control application that is widely used today. The term Baby Git was coined by the authors of this manual to refer to the set of commands that were the forerunner of the present-day Git application. The program is written in the C language and has a total of 7 commands that are run on the command line.

The Baby Git program enables a user to set up a local repository to which the user can add files to be tracked and subsequently update the repository when changes are made to those files. Other functionalities include the ability to list the files that have been committed to the repository, to display the contents of those files, and to show the differences between the cached snapshots of the files and the working versions of those files.

As stated in Git’s original README file, the Baby Git program was designed as an efficient directory management system. The key to achieving this goal was to make use of file deflation (compression) in combination with a hash function, specifically the SHA-1 hash function, to map arbitrary file contents to unique hash values. Figure 1.4 illustrates a high level overview of the data compression and decompression process that Git makes use of. 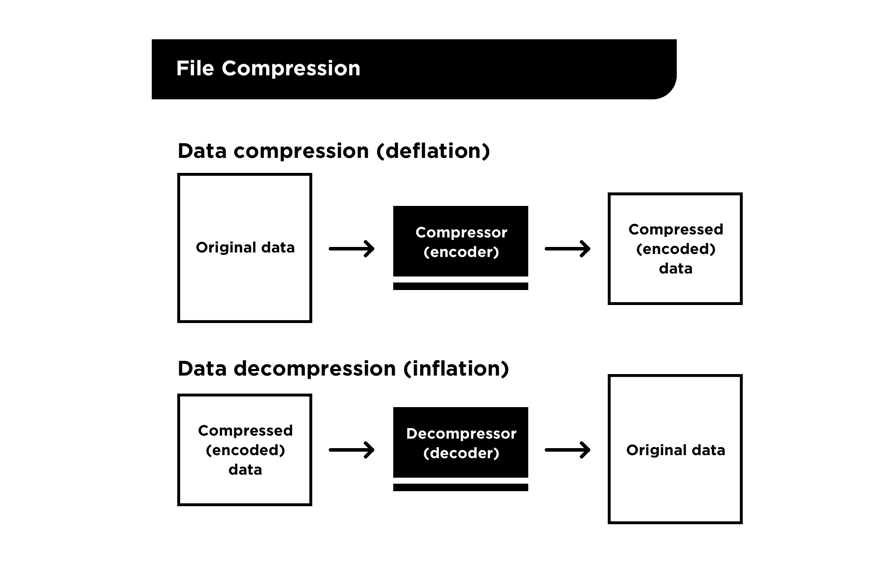 The 'Original data' box represents the code files in a software project. These files are compressed to a size that makes them more efficient to work with and stored in a local repository. When the data is retrieved for use, it is decompressed to yield the original contents.

Let us now move on to hash functions. A hash function is a one-way function – a function that case be easily run in one direction to convert an input to an output, but cannot easily be reversed to convert the output value back into the input. In addition, each input to the hash function produces a unique output. Consider a file with the text ‘hello world’ inside of it. We can take that text and pump it through the SHA-1 hash function to yield a unique output code. If we update the text to read ‘hello cruel world’ and re-hash it, we will get a new unique hash output value since the content has changed. As we will see, all objects in Baby Git are indexed and referenced through their respective SHA-1 hash values. Figure 1.5 illustrates how hash functions work. 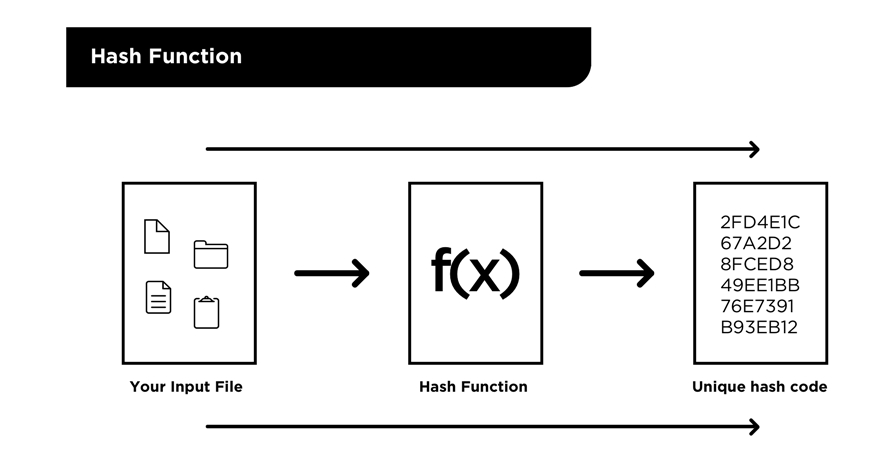 As an aside, hash functions are a core part of the HTTPS protocol that secures Internet traffic as well as cryptocurrency technologies like Bitcoin. In both of these use cases, there is an important need to compute a unique hash value of a secret 'private' key, in which the hash value (output) becomes the 'public key' - think Bitcoin public address or HTTPS certificate - which can be shared publicly.

Since all objects in Baby Git are indexed and referenced through their hash values, a hash rendered in this particular hexadecimal format is the basic naming unit that users of Baby Git will be working with to manage their repository.

In general terms, an initial workflow for adding and committing files to a Baby Git repository consists of the following steps:

When changes are subsequently made to the tracked files, the user can then update the repository database and cache with these new changes.

Components of a Baby Git repository

The general structure of a stored object is as follows:

There are three types of objects in Baby Git: A blob object, a tree object, and a commit or changeset object. Thus, the object tag in the structure above can be 'blob', 'tree' or 'commit'.

A blob (Binary Large OBject) object is a general abstraction for user data. In practical use, this type of object contains the contents of a digital file that a user has added to the repository. In other words, a blob object is a type of object that corresponds to a user file in binary form – it could be any type of file the user wishes to add to the repository, such as a plaintext file, video file, Word document, etc. The Baby Git program will generate a blob object for each file that a user adds to the repository, and this blob object will be named, indexed, and referenced through the deflated blob object's SHA-1 hash value.

A blob object has the following structure:

A tree object has the following structure:

In the structure above, file 1, file 2, etc. refer to files that the user has added to the repository. For each file, the mode, name, and hash value are stored. The file mode is an octal number whose value gives the file permissions and type, as defined in Unix-like systems. The file path is just the regular path (including name) of the file. The SHA-1 hash is the hash value of the deflated blob object in the object database that corresponds to the file.

A commit or changeset object is the result of committing a tree object to the repository database. It contains the hash value of the tree object being committed, the hash values of any parent tree objects specified by the user, metadata about the user who committed the tree, the time and date when the commit was made, and a user-supplied comment.

A commit object has the following structure:

As usual, the hash values indicated above all refer to hash values of deflated objects. Note that it is possible to specify up to 16 parent tree objects in Baby Git.

Another component of a Baby Git repository is the object database. This database is simply an organized set of folders and files used for locally storing blob, tree, and commit objects for use with Baby Git.

The first step in setting up a Baby Git repository is to initialize the object database. The user can specify an existing objects directory through an environment variable. If not specified by the user, the program defaults to creating .dircache/objects in the current folder to represent the object database directory.

Under the objects directory, the program creates 256 subfolders that are named from 00 to ff, corresponding to the 256 possible values of a two-digit hexadecimal number. In other words, the database directories will be as follows:

will have a path in the database that is equal to

The current directory cache is the equivalent of the modern day Git 'staging area'. It is a binary file that contains information, or metadata, about files that have been added by the user to the repository. When a user adds a file to the repository, the program adds a corresponding blob file to the object database, and the current directory cache is also updated to contain the file's metadata and the blob object's hash value.

File metadata and blob object hashes stored in the cache do not have to be consistent with the working versions of the corresponding user files. Edits and changes to the user files are not automatically reflected in the cache. However, the cache is used to provide an efficient way of obtaining any differences between the file information stored in it and the working versions of the files.

The current directory cache is stored in a file called .dircache/index in the user’s current working directory and has the following structure:

Note that several of these are file properties that are specific to Unix-like systems, namely the status change time, device ID, inode number, mode, user ID, and group ID.

The cache structure also contains a cache header, which consists of the following information:

Figure 1.6 below illustrates the components of a Baby Git repository. 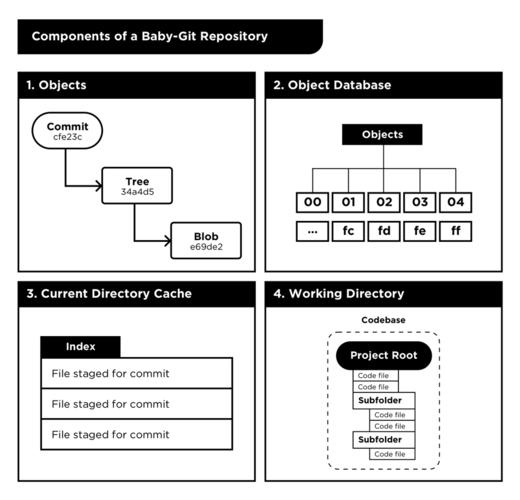 The 7 Baby Git commands are:

The sequence of commands below is a synopsis of the use of these commands and is shown here to provide the reader a general picture of the commands. A more detailed tutorial can be found in Chapter 4.

The reader can download the Baby Git package that accompanies this guidebook from either of these links: