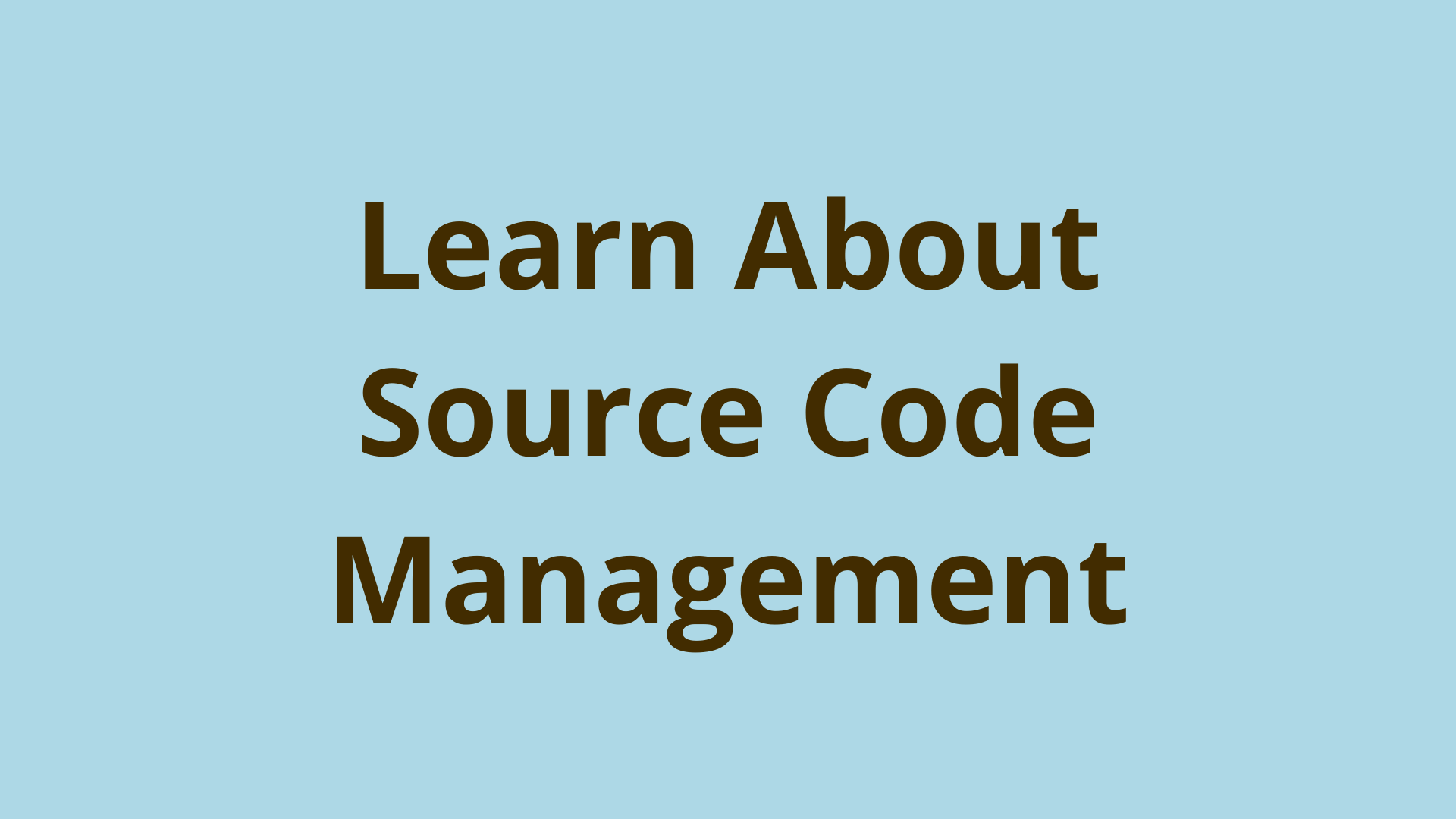 What is Source Code Management?

Is Source Code Management Different than a Version Control System?

Version control, on the other hand, is the practice of tracking revisions of a project over time, thereby creating a record of the various versions of the project that can be retrieved any time. Version control doesn't necessarily apply to source code. For example, you could track the changes to your novel as your write it with a version control system.

But for the most part, distributed version control systems like Git are used for source code management.

What is the Purpose of Source Code Management?

Historically, maintaining a code base was no easy task, calling for the avoidance of critical mishaps like conflict overwriting and overbearing organizational strain. As a result, innovative SCM tools have emerged that lower collaborative overhead and streamline the process of tracking code repositories.

When a team of developers collaborate on a coding project that utilizes a distributed source code repository, it's essential to implement a robust tracking mechanism to help ensure the integrity of the source code itself. Prior to the inception of SCM tools, many code bases had to be scrapped due to negligent record keeping and the inability to track a project's history.

SCM is an aspect of coding most programmers will become very familiar with during the course of their career. It's an invaluable tool, and is widely considered an integral part of development in the workplace.

Before answering this question, it's important to distinguish between Git and GitHub. Git is a version control system (VCS) primarily used for SCM. It has a robust feature set used for initializing and tracking code repositories. It is a piece of software installed locally on your computer.

On the other hand, GitHub is a cloud-based hosting platform used for storing and accessing Git repositories, while also exposing some of the features found in Git within its browser-based interface.

So, Git and GitHub are mainly used for source code management. Although technically Git and GitHub could be used to track anything that involves textual diffs over the course of time, it's predominantly used for tracking code repositories and is often described as an SCM tool.

To give an idea of GitHub's flexibility, it's worth noting a few other documented use cases. GitHub has been used for travel logging, musical composition, remixing recipes, and open source font editing, just to name a few.

The Importance of Source Code Management

Prior to SCM, teams had a difficult time keeping up with the evolution of coding projects. Oftentimes, a person would be put in charge of tedious tasks such as resolving conflicts and making merges. Using SCM allows for the creation of a source code repository that is governed by a set of rules and procedures provided by the SCM tool itself, greatly simplifying the process of managing collaborative code bases.

Without SCM, a lapse in communication or poorly documented change could lead to conflicts or overwrites. With multiple developers working on a shared code base, it's only a matter of when, not if this type of event occurs.

Imagine every time you open a file to begin working, you must notify everyone else to ensure no others are working on the same file simultaneously. Also imagine once you've completed your task and saved your work, no record exists to review the changes made in the event of future bugs or conflicts.

Source code management solves most problems associated with this outdated mode of operation. With SCM, your changes are tracked, overwriting is prevented, and developers are alerted to conflicts before any merges take place.

Arguably the biggest advantage in using SCM is having a stored history of a project's life, all the way up to the latest commit. This allows developers to always be up to date with the latest code, which is a great preventive measure against overwriting code and creating conflicts. It also allows the traversal of a project's history, one change at a time if so desired, which makes tracking down bugs, undoing changes, or reviewing a developer's code much more manageable tasks.

Communication overhead is an important factor to consider when multiple developers must collaborate on a shared code base. SCM allows for most communication to be substituted by reviewing textual diffs and notes found within commits, giving the developer more freedom and protection when working on upgrades or feature development.

Development workflow is greatly simplified when using SCM, and allows for the automation of project maintenance in more ways than one. Instead of creating a complex procedure for sharing a code base and merging changes, a team can simply agree on a simple set of rules for using an SCM tool. This calls for only a fraction of the overhead involved in maintaining code manually, saving companies money while preserving the sanity of developers.

The first step in effectively using an SCM tool is agreeing on how everyone is going to use it. If developers are committing at different rates, not utilizing branches, and sloppily documenting changes, it can become difficult to manage. Standardizing workflow is a good practice that helps projects evolve in a clean and efficient manner.

SCM streamlines the process of updating the code base, which naturally increases productivity and the frequency of commits. Ensure your local copy contains the latest code before making your own updates. Although most SCM tools will catch a conflict before allowing a merge to take place, it's still good practice to stay up to date for a number of reasons.

When given a project related task, developers are encouraged to create a new local branch for working on their end of the project tree. When a new branch is created, it creates a new and isolated line of development to only be used for committing changes related to a specific task. Branches are cheap, easy, and they make for a safer and easier to review code base. Additionally, Git is very flexible in supporting multiple branching models.

Committing often is usually an aspect of any standardized workflow, and for good reason. When reviewing changes for bugs or security, it's much easier to review a few lines of code at a time than unwieldy hunks. Committing often is such common practice, most SCM tools like Git allow developers to go back and break up large commits into smaller and easier to digest pieces.

Documentation is an integral aspect of any SCM tool, and it should serve as a guide when traversing any part of a project's history. It's important to never get lazy when documenting your notes in commit messages, comments, and your project's readme. No matter how small or trivial a commit may seem, there's always a chance someone will need to review your change. Remember, each commit includes information about who did it. It never looks good for the person who didn't consider the plight of those who may come behind them.

Source code management is the modern way developers track changes made to distributed code repositories. The most popular SCM tool is GitHub, boasting a huge community somewhere in the range of 73 million users.

SCM has many advantages such as simplifying workflow and keeping a historical record of a project's evolution. With so much upside and relatively nonexistent downside, it's no wonder that SCM has been adopted by virtually all tech companies whose needs include managing code repositories.

As a developer, learning SCM and its core concepts is a must. If SCM is a new concept, there's no moment better than the present to make that first initial commit.