How to create an executable jar in java 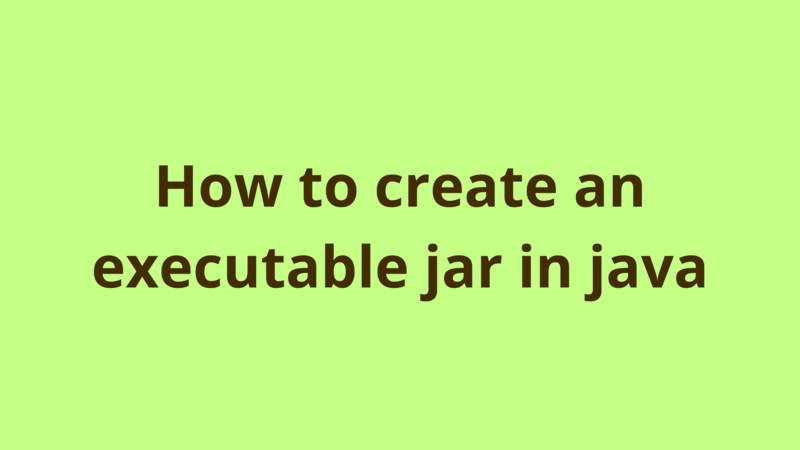 A jar file is executable if it contains at least one entry point class with a main method. In this tutorial, we define the different ways to create an executable jar.

Let’s consider a typical hello world example as the following:

Eclipse provides a tool to generate an executable jar out of any standalone application, to do this:

right click HelloWorld -> Export, then you get the following screen:

Search for Runnable JAR file , then click next. In the next page select your main class (Launch configuration) and name the jar file as the following:

If you open executable.jar (using winrar or 7-zip tools), you will get something like this:

The jar holds all the compiled classes along with their packages, in addition to a folder named as META-INF which holds a file called MANIFEST.MF, this is the file which makes the jar executable, since it holds the path of the main class of the application, without this file the jar cannot be executed.

In this section, we consider that you have already installed java on your machine, and you already added the java path to your PATH environment variable.

Another way to create an executable jar is through using the ‘jar’ command in the command line. The command accepts as input the manifest file as well as the list of compiled classes to be packaged in the jar.

Going back to our example, we move to the bin directory of our project and create a file called manifest.txt as the following:

P.S: it’s necessary to insert a new line at the end of the manifest file in order to successfully generate the jar file, otherwise ‘no main manifest attribute’ error is thrown.

Here, we set the path of the entry point class of the application to com.programmer.gate.HelloWorld, note that it’s recommended to create the manifest file inside bin directory so that java can find your main class while execution without the need to explicitly set the classpath.

After creating the manifest file, open cmd as administrator and run the following command:

You can still generate an executable jar without creating a manifest file, you just set the main class of your application and the jar tool automatically creates the manifest file, the following command does the job:

where com.programmer.gate.HelloWorld is the main class to be added in the generated MANIFEST.MF

Normally if you try to execute a non-executable jar file, you get ‘Failed to load Main-Class’ error. This message means that your manifest file doesn’t explicitly set the path of the application’s entry point. So in order to make your file executable, you can directly update the manifest file of the jar through the following steps:

Here we go, you get an executable jar !!

A jar file is executable if it contains at least one entry point class with a main method. In this tutorial, we define the different ways to create an executable jar.