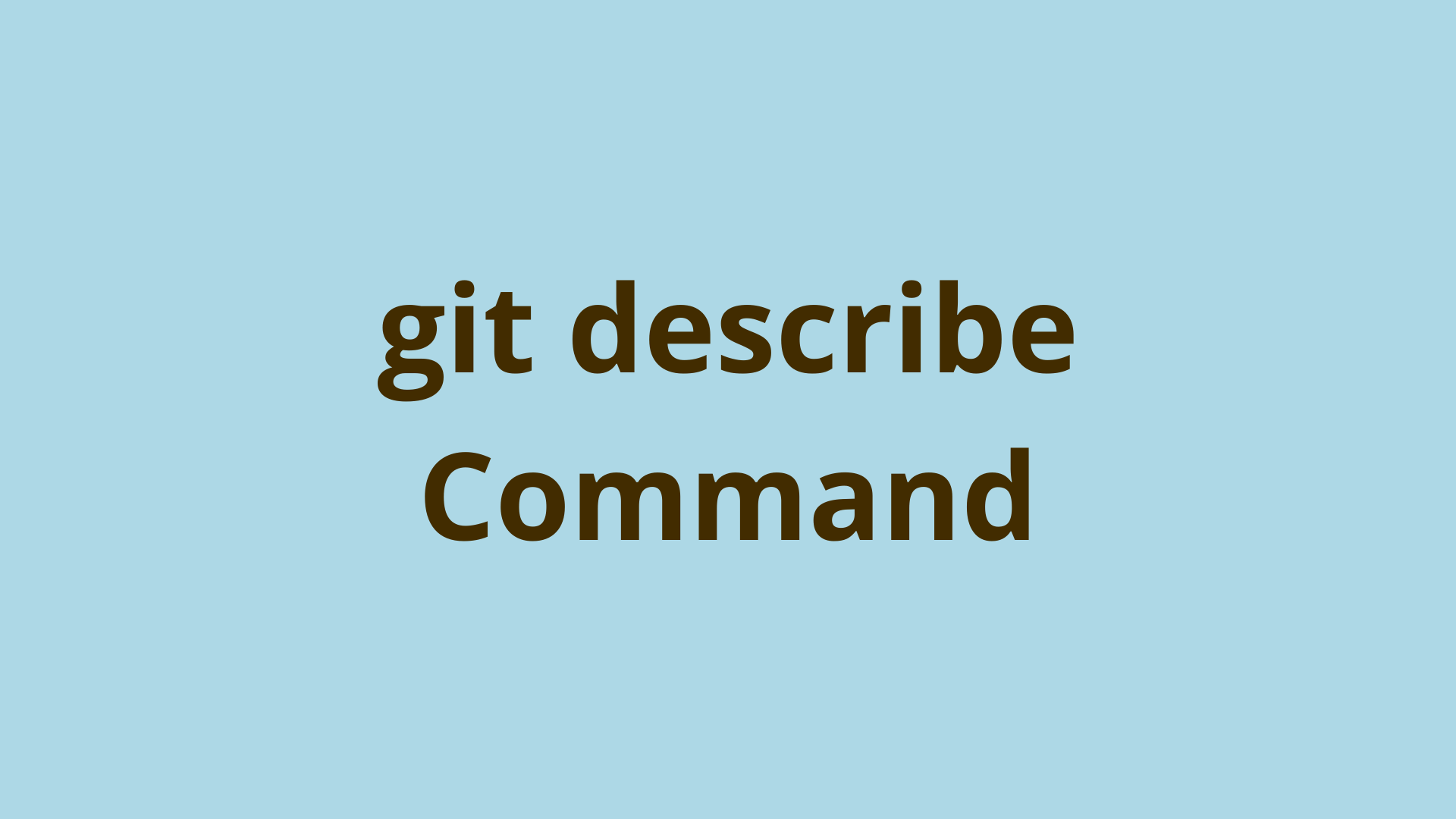 What is git describe?

As projects grow, it becomes more and more difficult to track changes across a large repository with many commits. The git describe command generates a text description of a particular commit in a Git repository. By using the git describe command, developers can quickly and easily locate specific commits or determine the version of a project without having to search through the commit history manually.

Git Describe is a Git command that allows you to describe the most recent tag that is reachable from a commit. Essentially, it takes the latest tag in the commit history and applies it to the commit. If the commit is not a tagged commit, git describe will try to come up with a human-readable version string by using the number of commits and the abbreviated commit hash since the last tag.

How does git describe work?

The git describe command is useful for identifying the current version of a project, especially when working with tags and releases. It can be used to generate version strings, changelogs, and other documentation related to the project's release history.

The git describe command works by finding the most recent tag that is reachable from a commit. It then appends the number of additional commits on top of that tag, along with the abbreviated commit hash, to create a version string. For example, if the commit is two commits ahead of the nearest tag, git describe might output something like v1.2-2-g123456, where v1.2 is the nearest tag, 2 is the number of commits since the tag, and g123456 is the abbreviated commit hash. By default, git describe points to the latest commit of the active branch, also known as the head.

What is a tag?

In Git, a tag is a reference to a specific point in Git history. Tagging is generally used to capture a point in history for a marked version release. There are two types of tags in Git: lightweight and annotated.

If you want to fully understand the git describe command, it is essential to comprehend git tags. A git tag is a label applied to a specific commit in a Git repository. They are most commonly used to signify version releases like v1.0 or v2.0.

Lightweight tags – references to specific commits. Do not contain the full commit object, but rather just a pointer to the commit. Lightweight tags are often used to mark specific code versions or identify important commits. Unlike annotated tags, these tags do not have a message or author attached to them.

Annotated tags – are stored as full objects in the Git database, similar to commits, and they can be signed with GPG (GNU Privacy Guard) to provide additional security. Annotated tags are a way to mark a specific commit in a Git repository with a tag that includes the following information:

Git tags are an important part of version control and release management, and they can be very useful for identifying specific points in the project's history.

To use git describe to extract the most recent reachable tag from a specific commit, you can simply run git describe with no arguments:

This is the equivalent to running git describe HEAD.

If you don’t provide the commit hash, you will be pointing to the Git HEAD by default. In the above example, git describe has output the tag v1.0, followed by the number of commits since that tag (2), and the abbreviated commit has (g123456). The g prefix indicates that this is a commit that has not been tagged.

How do you describe a commit?

You can also use git describe to describe a specific commit by providing the commit hash as an argument. Here’s an example of the git describe <hash> command and its expected output:

In this example, git describe has output the a1b2c3d4 commit.

Let’s take a look at some of the subcommands that are commonly used with git describe:

Describing All Commits | git describe --all

If you want to access any ref found in the refs/ namespace, instead of just annotated tags, use the --all subcommand. This includes all known branches, remote-tracking branches, and lightweight tags. Here’s an example of how git describe --all output differs from git describe:

If the HEAD commit is a tagged version ‘v1.2.3’ and it is also the tip of the master brand, the output might be something like ‘v1.2.3 master’.

The --tags command lets you view all tags found in the refs/tags namespace, both annotated and lightweight. This command will output the most recent tag that is reachable from the current commit, along with the number of commits that have been made since the tag was created. For example, if the current commit is five commits ahead of the most recent tag, the output might look something like this:

You can use the --contains option to view the tag that predates the commit. Or in other words, to describe the commit that is the closest ancestor to a specified commit and is also tagged. This git describe subcommand automatically implies --tags. Here is an example that demonstrates the use of the -contains option:

You can use the -- abbrev flag to specify the number of digits in the abbreviated commit hash that is included in the description output:

Alternatively, if you want to suppress the longer format and show the closest annotated tag, you can use --abbrev=0.

If git describe throws the message fatal: No names found, cannot describe anything you don’t have any tags in your current repository. You must have at least one tag in your repository to use the git describe command.

To create a git tag for your repository, follow these steps:

Note: You can also create an annotated tag using the -a flag or a lightweight tag without a message using the -m flag.

How to Fetch Remote Git Tags

Fetching remote tags is useful when you want to get the latest tags from a remote repository. This is especially important when working in a team, as other team members may have created new tags that you don't have locally. By fetching the latest tags, you can stay up to date with the project's release history and versioning.

To fetch remote tags in Git, you can use the git fetch command with the --tags flag. This will download all tags from the remote repository and store them locally.

Here's an example of how to fetch remote tags:

For example, to fetch tags from the upstream remote repository, you can use the following command:

Once the tags have been fetched, you can view the list of tags by running the command git tag.

It's a good idea to fetch remote tags periodically, even if you're not actively working on the project. This will ensure that you have the latest tags and that your local repository is in sync with the remote repository.

Git describe helps you to identify the current version of a project based on tags and commits. This command can be useful for generating version strings, changelogs, and other documentation related to the project's release history. Additionally, git describe can help you understand the context of a commit within the project's history. By showing the number of commits and the abbreviated commit hash since the last tag, git describe can give you a sense of how far the commit is from the last tagged release.