Git Rebase | A Guide to Rebasing in Git 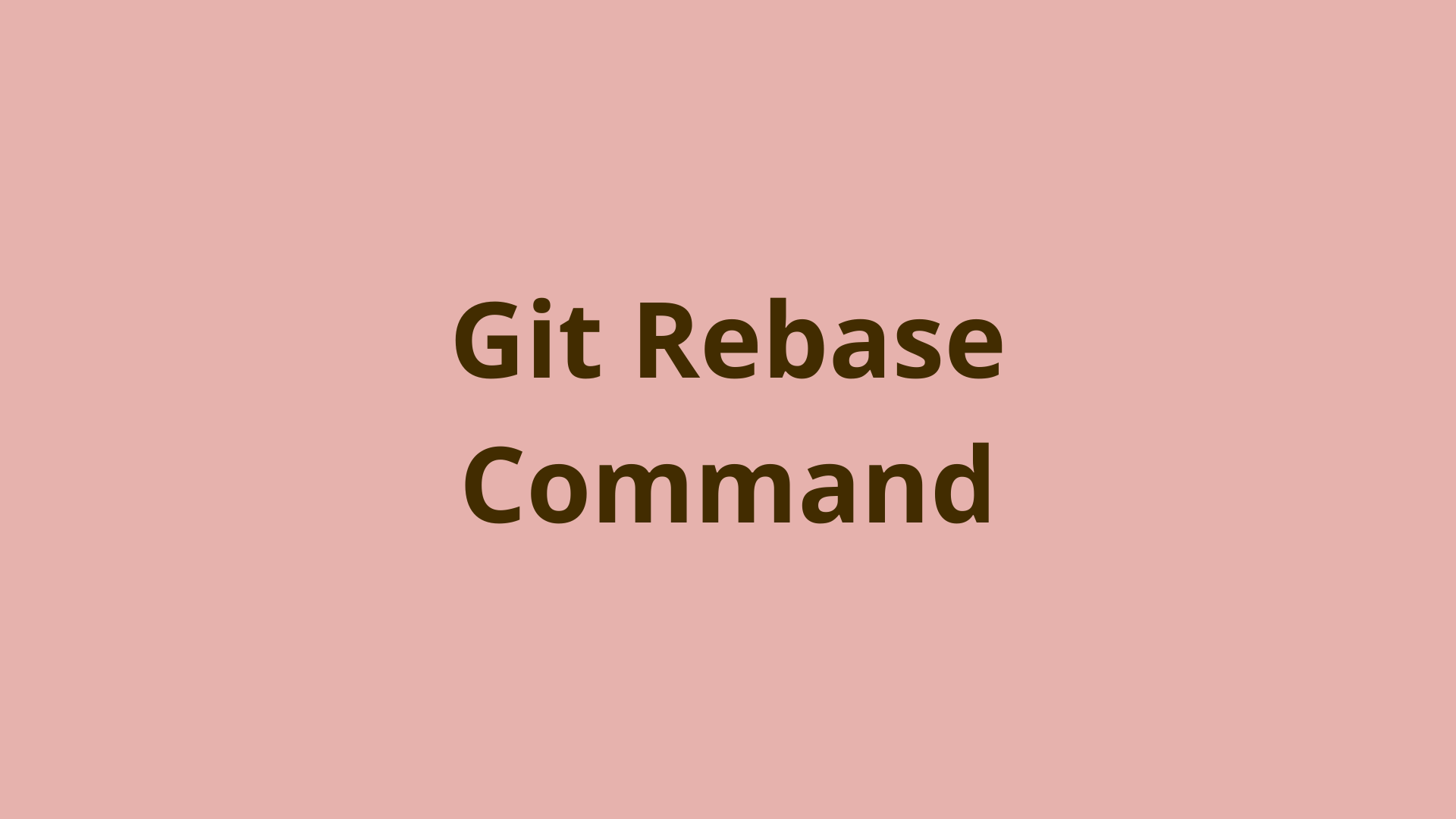 "Rebase is at its essence simply taking a series of commits as if they were individual patches, and applying them at a different point in history" - Gabe da Silveira

Git Rebase is one of the most commonly used ways to rewrite commit history on a branch. You can use it to clean up a feature branch before publishing or incorporate new commits from another branch. It is an integral part of several Git workflows, notably Git Flow. Furthermore, Git rebase is helpful at any stage in the Git life cycle because it allows you to maintain clean and readable code with a linear project history.

A basic understanding of Git would be useful before reading this article. This page also assumes a basic knowledge of branches and commits in Git.

The rebase command is technically just a history rewriting command. In practice, you can use it to integrate changes from one branch into your target branch. You can think of branches like stacks of lego blocks (each block is a commit). Conceptually, rebase can move one stack of blocks onto another stack of blocks. One complication is that rebase can change the stack of blocks while moving it. More on that later.

There are two primary use cases of Git Rebase that we will go over:

"People can (and probably should) rebase their _private_ trees (their own work). That's a _cleanup_. But never other people's code. That's a 'destroy history'." - Linus Torvalds

You may have heard before that rebasing is dangerous and a bad idea. As usual, the devil is in the details.

If you are one developer working in a private Git branch or private repository, using Git rebase is perfectly acceptable. Generally speaking, rebasing is a viable option if the branch you are working on is not published to a remote server. This is because you have the only copy of the history, and nobody else is depending on it.

It is often ok to rebase a feature branch that is shared with a small team of developers communicating closely. A conflict may still occur, but close communication will make it easy to see changes and resolve any issues.

It is generally never ok to rebase a public branch. Other people may have a copy of the history, and they will have no easy way of resolving the inevitable conflicts if you Git rebase at this point.

Using Git rebase will ensure your project maintains a clean, linear project history. This can prove valuable later in the event you are trying to uncover a bug using Git bisect.

If you are committing as often as you should, you may end up with some wacky Git commit messages on your feature branch. Rebasing allows you to modify your commits and commit messages with squash, fixup, or other commands. Doing this makes maintaining a clean history easier.

Why You Should Not Use Git Rebase (Drawbacks)

Rewriting history when pushing to a remote repository can be a problem. Git will detect the history mismatch and will reject the push. You will need to use Git push <your_branch_name> --force to make it work. Additionally, if someone pushed commits and you force push, those commits will be nuked.

If the rebased branch has multiple commits that change the same line and somebody also changed that line in the base branch, then you might want to resolve merge conflicts for that same line multiple times, which you never need to do when merging. On average, there will be more merge conflicts to resolve. This issue may be alleviated by rebasing and squashing on the merge-base first, before the regular rebase:

Note: rerere is another possible solution to this issue, but it is less intuitive and requires more setup.

Finally, a rebase moves commits (re-executes them), so the Git commit date of all moved commits will be the time of the rebase, and the Git history loses the initial commit time. If you want an option to retain the exact date of a Git commit, then merge is the better option. The same issue happens for author data and other commit metadata.

Use Case 1: Preparing for Fast Forward Merge of Feature Branch Into Master

Rebase can be used to fast-forward merge two branches that have diverged [3].

Let's look at an example (' denotes the same content but different SHA):

Step 1. You git checkout a feature branch and make some commits. Commit B is the merge base or latest common ancestor between master and feature1

Step 2. You add any new commits to master. You'll notice that the two branches have now diverged. You can detect this by running git fetch -a which will show that master has changed. Then run git log to see the changed commits.

Step 3. Run Git rebase master from the feature1 branch. Use git status to view conflicts as they come up.

While rebasing, after resolving any conflicts and adding them to the staging area, run git rebase --continue to move on.

Made a mistake and want to quit? Run Git rebase --abort prior to the rebase finishing to reset things back to before the rebase started and exit the rebase context.

Note: While rebasing, you may run into merge conflicts. Merge conflicts just mean that Git needs help resolving a merge. In this case, Git will inject text into the affected files like the following:

What To Do After Rebasing?

You already read about the drawbacks of force pushing after a rebase. A safer way is to always use the --force-with-lease flag, instead of --force, which will reject the push if newer code exists on the remote.

A common follow-up to do after a Git rebase is to open a merge request to merge the feature branch into master. This merge request will be able to fast forward merge, which can simplify your merge request approvals.

Also, if you are working with a small team, make sure you communicate that the rebase has happened.

While rebase is great for cleaning up your commit history, Git interactive rebase can be used to give you more manual control of your edits. Some of the options include editing commit messages, combining commits, or removing commits. (4).

This is often combined with use case 1.

Reorder the lines and change the commands from the default (pick) to whatever you want. For example, to squash everything and get an opportunity to edit the commit message, change it to:

What Is the Difference Between Merge and Rebase?

What Is the Difference Between Git Pull and Git Pull --Rebase?

Dealing With When Git Fetch Shows a Forced Change, but You Already Committed Locally

In this case, you will need to transplant your changes from the local branch to the upstream branch. You can accomplish this with Git rebase --onto

State after forced push (someone squashed B, C, and D into B'):

Use git log to identify the SHA of your oldest unpublished commit (commit E).

Use git rebase --onto origin/feature1 <Commit E SHA> feature1 which gives you the following output:

When to use Git pull, Git rebase, or Git merge?

Each one of these commands is complex enough to be nuanced. However, there are rules of thumb for their usage.

Use Git pull when you want to get the latest changes from your own remote branch. Technically you can use this to incorporate changes from another branch, but that usage is less intuitive.

Use the Git merge command when you want to integrate the latest changes from another branch. For example, to integrate data from a feature branch into master.

Use Git rebase when you want to clean up history or before merging so that the merge will fast-forward. For example, it is common to rebase a feature branch on master prior to merging the feature branch into master.

Should I always Git rebase?

Should you always rebase before pushing? Not necessarily. First, ask yourself what you would gain from it and also who else may be impacted if you rebase.

If you are working on a public project such as an open source software on Github, then rebasing would be a rare exception due to the hassle it could cause other contributors.

Git rebase is an effective tool for modifying your commits, with commands like squash, fixup, and reorder. Though it may not be right to use all the time, Git rebase can come in handy when you are working in a private Git repository or on a small team. Furthermore, rebase makes it easy to clean up a branch before merging in Git Flow, which makes it an essential component in workflows where you want to maintain a clean and readable project history.

We just learned what Git rebase is and why it isn't always a bad thing despite the reputation. Additionally, we went over tactics on how to use Git rebase for various scenarios and avoid common pitfalls.

By now, you should feel comfortable enough to start using some of these concepts on your own projects.

If you're interested in learning more about how Git works under the hood, check out our Baby Git Guidebook for Developers, which dives into Git's code in an interactive and accessible way. We wrote it for curious developers to learn how Git works at the code level. To do this we documented the first version of Git's code and discuss it in detail.