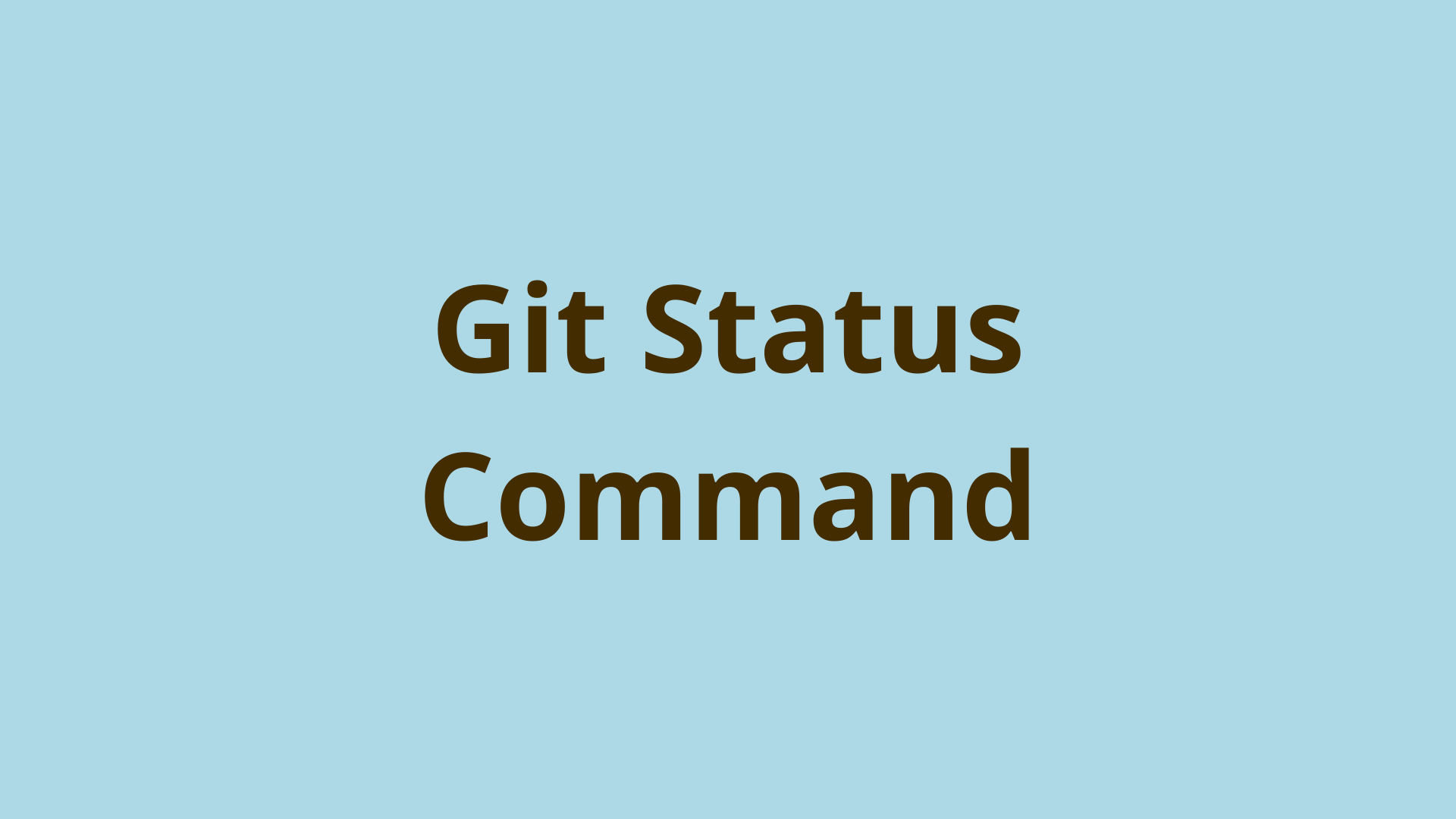 What does Git status do?

One of the first commands you'll use when learning Git is git status.

The git status command provides useful information about the current state of your Git repository. It outputs the active branch, remote sync status, and a list of modified files in the working directory and staging area. It doesn't include details of your project's commit history.

By default, running git status in your project displays the following details:

In this article, we'll discuss each of these points in-depth so you understand how to use this information. We'll also cover when to use git status, and provide some git status examples. Finally we'll go over some lesser-known command-line options for git status usage and mention some related Git commands.

What is the output of the Git status command?

If you run git status outside of any Git repository, you'll probably get the following fatal Git error:

So make sure you use cd <your-project> to navigate into your development project before running git commands.

As you can see, we added the numbers (1) - (5) to the output corresponding to the bullet points in the previous section. Note that the current Git branch (1) and branch syncing status (2) will show up any time you execute git status.

Also note that Changes to be committed (3), Changes not staged for commit (4), and Untracked files (5), will only be displayed if a file exists and meets the conditions for that section.

When should I use Git status?

Git status is your best friend when you ask yourself any of the following questions.

Which Git branch am I on?

The first piece of data git status tells you is what branch you're on, such as On branch master or On branch dev or On branch featureBranch1.

This tells you what branch name is currently checked out in the working directory. This is also called the active branch.

You can double-check this by running the git branch command. Git branch will list the local branches in your Git repository, and put an asterisk next to the currently active branch:

Is my Git branch in sync with the remote branch?

The second piece of info git status provides is the active branch syncing status with its remote tracking branch.

A remote tracking branch is local copy of each of your branches that Git creates behind the scenes. This helps Git manage syncing branches when you connect to a remote repository via git fetch, git pull, or git push.

Most of the time, git status will tell you Your branch is up to date with 'origin/master'.. This means your active branch is in-sync with its remote tracking branch.

If you make one new commit locally and then run git status again, git will report Your branch is ahead of 'origin/master' by 1 commit. This simply tells you that you have 1 new local commit that hasn't been pushed to the remote repository with git push yet. After running git push or git push origin <branch-name>, git status will again tell you your branch is up to date with its remote tracking branch.

Which files have I moved to the Git staging area?

The third datapoint that git status reports is a list of "Changes to be committed". This is a list of files that have been added to the staging area using the git add <filename.ext> command:

In this example, git status tells us that filename1.ext has local modifications that have been staged and are ready to be included in the next commit using the git commit command.

Git also provides a suggestion to run the git restore --staged <file> command to unstage the file if desired. This will remove it from the staging area and move it back to the working directory. Don't worry, your local file changes won't be lost.

Which files have I made local changes to?

The fourth section that git status displays is "Changes not staged for commit". This is a list of tracked Git files that have local modifications, but have not been staged:

Git also suggests two additional commands that could be useful in this scenario. The git add <file> command can be used to stage the file changes for the next commit.

The git restore <file> command can be used to discard local changes to the file. This essentially resets the file to its state in the previous commit. Note that running git restore this way on a non-staged file WILL cause your changes in the file to be lost, so be careful.

Are there any untracked files in my Git working directory?

The fifth and final section that git status provides is "Untracked files":

This list includes Git untracked files, which are usually new code files that haven't been added with git add yet. The output suggests running git add <file> if this file should be staged for the next commit.

By default, git status won't display untracked files that are ignored in the .gitignore file.

Note that just because a file is untracked, doesn't mean you want to commit it. Many types of files related to the local environment usually aren't committed. These include local dependencies such as the node_modules/ directory, local OS files like MacOS .DS_Store, local build files like the Java target/ directory, and more. These are usually ignored by adding them to the hidden .gitignore file.

Now we'll discuss some useful git status command-line options that you may not be aware of.

The --ignored option tells Git status to display an additional section showing files that Git ignores based on the .gitignore file:

The example above shows a set of files in a Java Eclipse project that are typically ignored in Git.

One or more directories or filenames can be supplied after the git status command which will only list matching files in the output:

Note that in the example above, only info related to the filenames listed in the command is displayed.

The git status -s or git status --short options can be used to show a compact version of the command's output:

The git status -s -b or git status --short --branch option tells Git to display the branch and tracking info even when the command is run using the shortened (-s) format:

Note that the branch and tracking info is a short-form version due to the presence of the --short flag in addition to --branch.

The git status --show-stash option displays the number of stash entries that are currently in the Git stash:

This line is displayed at the end of the output.

The git status --porcelain option provides basically the same short-form output as git status -s, but the --porcelain flag guarantees that the output format will remain stable across different versions of Git.

This can be useful if you need to use the output of git status in scripts or for automation, since you can be sure the format won't chance in the future.

The git status -v option displays a textual representation of the changes in the Git files in addition to the filenames. The essentially amounts to adding the output of git diff to the output.

By default, Git will automatically detect file renames for tracked files and display those changes when you run Git status. The git status --no-renames option disables rename tracking in the command output. This means that Git will report a rename as a tracked file deletion and a new untracked file.

We recommend learning the git mv command to rename files in Git.

In this article, we discussed the purpose and usage of the git status command. We covered when to use Git status, what it displays by default, and how to use some lesser-known options to enhance your development experience.