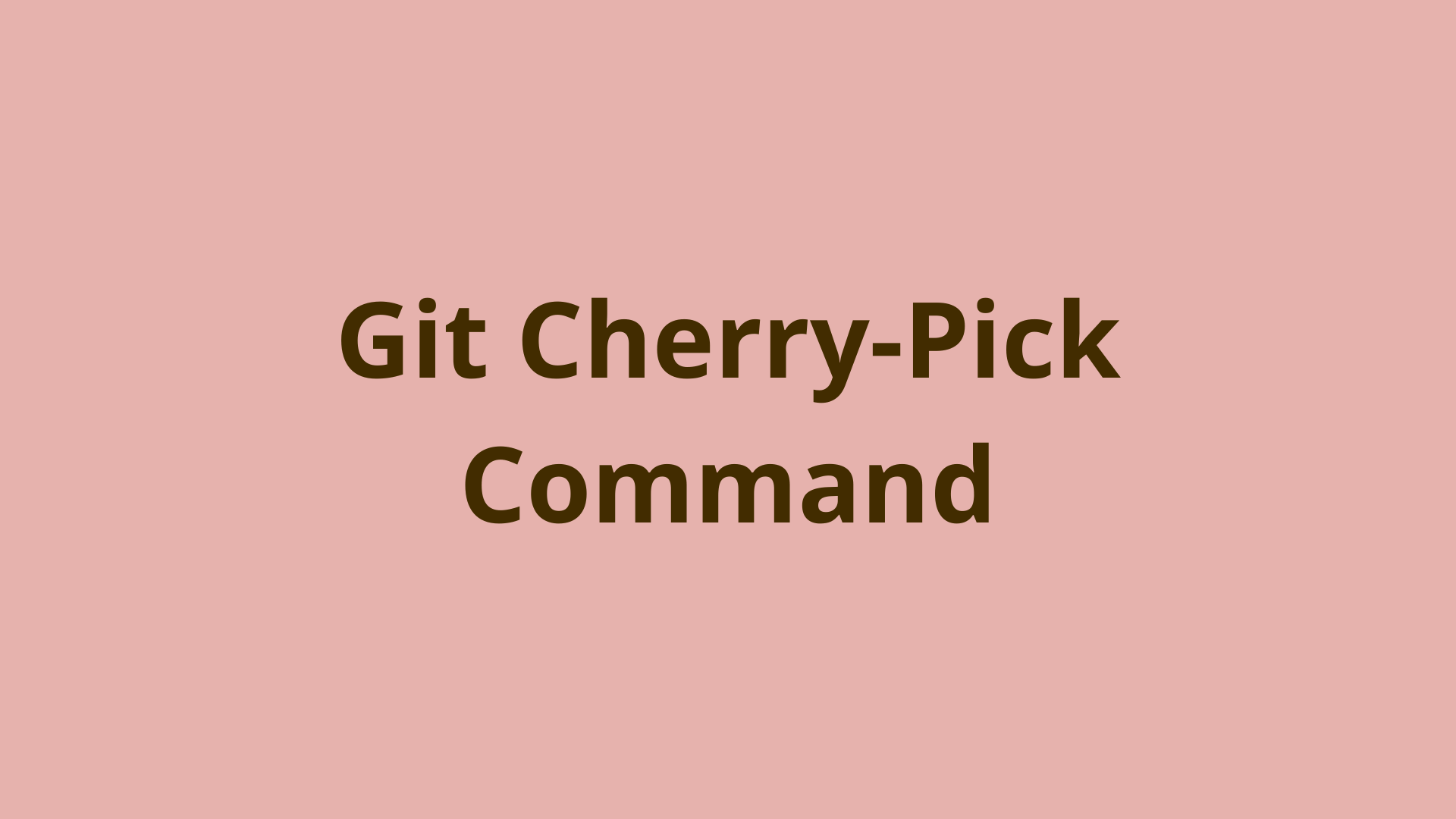 Git is a popular version control system (VCS) often used to collaborate on a distributed code base. Git allows you to track all of the changes you make on your project using snapshots called commits.

Like other version control systems, Git allows a developer to store a series of commits within branches. We have the option to diverge from the main branch, or any branch, as often as we like by creating a new branch. This workflow leads to the eventual necessity of merging some, or all, of one branch into another.

However, sometimes you might just want to pick one or more commits from one branch to another without doing a full merge. This is where the ability to cherry pick Git comes in handy.

What is Git Cherry Pick?

Git cherry pick is a powerful tool for applying commits from another branch to the current branch.

Git cherry pick is a command for applying the changes made by specific commits in another branch to the current HEAD. Rather than applying all commits following a branch's divergence, such as with git merge, we can target only a specific commit or set of commits.

If you need only a small number of commits from one branch applied to your current branch, you can leverage the git cherry-pick command. Git cherry pick gives you the option to surgically apply the changes made by commits, one at a time, from one branch to another.

How to Git Cherry Pick?

The most common use case of the cherry pick Git command is referencing a single commit and applying it to another branch. To do this, follow this syntax:

This syntax allows you to git cherry pick commit <commit-id>, which represents the commit to apply to the current HEAD.

In some cases, you might want to use the command git cherry-pick to pick multiple individual commits using a single command.

Achieving this is simple with the following syntax:

We simply include each commit one after the other, separated by a space.

Cherry picking is an effective way of referencing a range of commits as well, which was introduced in Git version 1.7.2.

If you want to git cherry pick a range of commits, use the following syntax:

In this example, commitA must be older than commitB, or the command will fail. It's also important to note that if commitA needs to be included, we can add the ^ character in front of the commit in question, like so:

Now that you have a basic understanding of Git cherry pick, let's create an example repo and put it into practice.

Let's check out what we have so far:

Looks good. Now, let's assume that while working on our feature branch, an important bug fix was made inside the cherry-picking.ext file within the master branch.

Let us also assume we can't safely continue work on our feature branch without first applying the bug fix to the feature branch. We’ll need to git cherry-pick master. This should be a breeze with cherry-pick, so let's try it out!

To simulate our bug fix, let's do the following:

As we can see from the last two outputs, our cherry-pick was executed flawlessly. We can proceed safely with our feature branch, which was the goal.

If you look at the output from our last example, you can see that Git cherry-pick does create a new commit with a unique hash.

This is because Git cherry-pick doesn't just extract a commit and tack it onto the current HEAD. Instead, it looks at the specified commit, compares it to its parent commit, and applies the resulting diff to a new commit at the current HEAD.

Furthermore, because a commit's ID depends on that of its parent, a cherry-picked commit will always have a new SHA1 commit ID, due to having a different history than the source commit of the cherrypick.

To verify this behavior, we can look at the two diffs in question by using the Git show command on each of the two branches:

A quick review of the diff output confirms that we have two separate commits with identical diffs, but differing commit IDs.

When using cherry-pick in a large repository where frequent commits are made, it's common to run into conflicts.

To illustrate, let's create a conflict by taking the following steps:

As you can see, this Git cherry pick attempt didn't go quite as smoothly as the last one. This is because we modified the same line in cherry-picking.ext in both branches, and Git doesn't know which change to keep.

Git added some text to our file showing us the conflicting data. The two commits in question are separated by '=======', with the current HEAD on top and the commit to be cherry picked on the bottom.

To resolve the conflict, you simply need to modify this file following these steps:

In our case, let's leave both commits there. So, after step 2, our cherry-picking.ext file should look like this:

Now with our conflict resolved, we can move on to step 3 and finish the cherry pick operation:

Cherry-pick keeps the original commits and branches and creates new ones. A rebase moves the base of the branch and all of the commits that go with it.

Conceptually, a rebase is similar to multiple cherry picks. However, in practice, these tools will achieve different results.

It's important to remember that Git rebase](/blog/git-rebase) actually moves the base of the topic branch to the tip of the master branch, hence the name re_base_. In contrast, a cherry pick will copy a commit and apply it to the current HEAD.

Is a Cherry Pick a Merge?

A Git merge will take all of the commits from a topic branch, such as a feature, combine them into a single history, and apply this history to another branch, such as the master branch.

Based on everything you have learned so far, it's safe to say that a merge is not the same as a cherry pick. Git merge has an entirely different use case than git cherry-pick.

A cherry pick is great for surgically moving commits from one branch to another. In most cases, merging takes place when a topic branch has reached a level of completion and is ready to be merged with the master branch.

In this tutorial, we learned what git cherry-pick is, how it's used, and when it is the most appropriate tool for the job.

Cherry pick allows you to copy commits from one branch to another by applying the diff from the chosen commit and its parent to the HEAD of the current branch.

When you use cherry pick Git, you make small changes to a branch that significantly impact its development, for example, a bug fix or other consequential improvements. If you can master Git cherry-pick, you’ll be able to effectively collaborate with other developers in local or cloud repositories alike.

Now that you have all the tools you need to effectively use Git cherry pick, it's time to get out there and put what you have learned into practice.