Git-show | How to Use Git Show With Examples 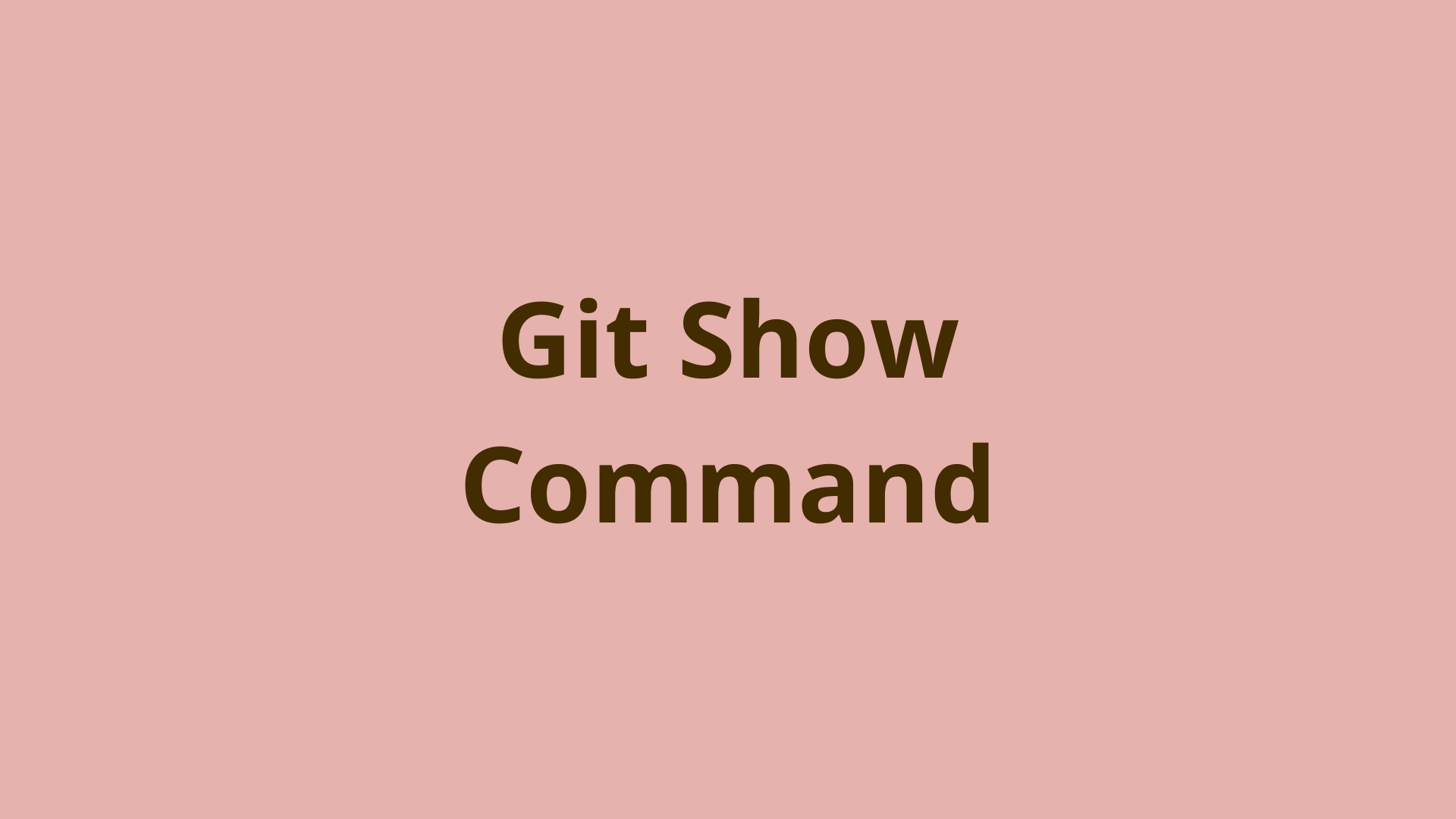 What Does Git Show Do?

The git show command is a powerful tool that allows developers to display the contents of Git objects within a Git repository.

As you add and commit your code changes, Git tracks these changes using four main types of Git objects: Blobs, Trees, Commits, and Tags. Git stores these objects in its object database, which is located inside the hidden .git/ folder.

The git show command is used to display the contents of any of these four object types:

Each of these Git object types can be queried using git show. This can be a very useful tool in your Git workflow. Now let's discuss the usage and output in more detail.

The basic syntax for git show is as follows:

We'll discuss some neat options later in the article. For now let's focus on the <object> parameter.

The object parameter defaults to HEAD. Git HEAD usually references the most recent commit on the active branch, except in the case of a detached head state.

Therefore, if you run git show on its own (with no <object> specified), you will be querying the last commit on the current branch. Remember, a branch is just a named reference to a commit. You can think of a branch as a label that points to a particular commit that signifies the tip of that branch.

Here is an example of the default output when running the git show command:

As mentioned, this is equivalent to running git show HEAD. The output provides a combined diff format. It tells us the commit details of the HEAD commit, along with a textual diff of the changes included in that commit. This can be useful when you want a git diff output in addition to the commit info supplied by git log.

In Git, commits and other objects such as blobs and trees can be referenced based on their unique ids. You are probably most familiar with the commit ids listed when running the git log command. Git generates these ids by compressing the content that makes up your changes and then hashing it with a SHA-1 hashing algorithm.

Some Git commands, including git show <object> can take any of these ids as arguments. When they do, they are referred to as revision parameters. This means that we can supply the command with the id of any SHA-1 identifier stored in Git's database. It could be a commit id, blob id, or a tree id.

It could even be a label that points to one of the aforementioned id types. Those labels could be branch names (which are moving labels that point to branch tip commits), tags (which point to specific commits), or other refs like HEAD.

We could use git show with the revision parameter set as follows: git show 95ae37c. This would show the same output as what we saw above, since 95ae37c are the first few characters of the same commit pointed to by HEAD in the previous example.

Git will locate the proper object so long as your id isn't ambiguous. This means you can supply the first few characters of your SHA-1 object id as the revision parameter instead of the whole unwieldy thing.

Let's quickly illustrate the output when supplied with a blob, tree, and tag as revision parameters.

Here is an example of git show <blob id>. In this example, the SHA-1 supplied represents a blob file with the word "test" written inside. Note how the file content is simply printed:

If we supply a tree id instead, it will display the object type tree, followed by the filenames and directories pointed to by that tree (i.e. the tree's "content"):

Notice that we were able to retrieve each type of object with its abbreviated SHA-1 hash. Since tag and branch names are simply labels that point to commits, they provide the same output as our commit example above.

If you want to view a range of commits, you can use the .. operator like: "git show 1c002dd..HEAD". This will return the textual diff as well as other log data related to commits within the range of the two provided revisions. Be sure to enter the revisions in ascending order, or you'll get you an empty return.

Below we'll list some common Git options you may find useful. This includes prettying up the command output, specifying the encoding, expanding tabs, and dealing with notes.

The options for git show also include an extensive array of diff formatting options.

Git offers the --pretty option for us to style and customize the output. We'll show a few useful built-in formatting options and some methods for customizing your own formats that will really clean up your results. Here's the basic syntax:

There are two main differences between using --pretty and --format:

To specify the 'full' format, use the following syntax:

To create your own custom pretty format that suppresses the textual diff, shows the author's name in blue, author's email in red, and the abbreviated commit hash, you could use this:

The git show command comes with a huge set of options for formatting the textual diff. Diff formatting isn't just about refining your query to return only the specific diffs you want to see - there's also the option to make stylistic changes as well.

For instance, the --diff-merges option will determine whether output of diffs for merge commits shows. The will impact the display depending on whether the developer makes merge commits:

While the --color option is a stylistic modifier that determines when textual diffs are colored:

You can generate a raw diff format using the --raw option:

This include the usual commit info plus the added, modified, or deleted file mode.

Another cool option is the unified diff format --unified=n, where n is the number of lines to show on each side of (above and below) the changed content:

The options for diff formatting are extensive. If you'd like to take a look at an exhaustive list, head over to the git show docs and have a closer look.

We've already gone over some examples of git show, but let's take a closer look at the output and what it means. Consider the following Git project tree:

For the initial commit, suppose all the files are empty except file1.ext, which simply has 'sample text' written inside. If we run the raw command, here's our return:

As you can see, the first four lines are our commit information: object type and id, author, date, and full commit message, in that order. Then, the textual diff begins.

Let's replace the sample text with some code in file1.ext, commit the changes, then use git show and go over the diff output line by line. We will use the --oneline pretty format and the abbreviate commit option for truncating the details since our focus is on explaining the diff output:

We can gather some info from the diff output for another example. Earlier on we mentioned that you can use git show to query blob objects by their SHA-1 hash; let's give that try:

As you can see, we successfully returned the contents of the blob, which reflect exactly what we last committed.

Now, let's tag our latest commit. We'll call our tag 'v2.0' and then try querying the tag using a few of our nifty formatting options we learned earlier:

Awesome, we successfully returned some barebones metadata about the commit with by referencing the tag.

And last but not least, let's check out an example of querying a tree object with git show. We already have our friendly named tag, so let's query the tree pointed to by our tag and see what happens:

And there we have it - a successful return of all the files in our current tree.

How Can I See Commit Messages?

It is common to want to see only the full commit message associated with a commit. This can be done using the -s flag to suppress the textual diff and the --format=%s option to omit all commit details except for the commit log message:

How Do I See All My Commits?

The git log command is best suited to listing all commit messages in your Git repo.

Git show is built to provide a more specific snapshot of the git repo history, for a specific object or range of objects. If you'd like to see a range of commit messages, this could be done using the .. operator we mentioned earlier. But it's likely easier to use git log for this.

What is the Difference Between Git Log and Git Show?

The git show and git log commands are quite similar and have some overlapping features. The differences exist because they were created for slightly different purposes. The default behavior of git log gives a broader snapshot than git show does.

For example, a simple git log command displays a full log including details of every commit in your Git repository. On the other hand, git show displays only the last commit made in the repo and will include the textual diff by default.

Both commands have the ability to return a range of commits using the .. and ... operators. They can also both return textual diff. However, the default behavior of each is what you should consider when choosing which tool to use.

A good rule of thumb is that if you need a detailed look at one commit or small range of commits (or other individual Git objects), go with git show. Otherwise, you may consider using git log.

We've taken a comprehensive look at git show, a Git CLI tool used for returning detailed data on specific git objects or a range of git objects such as commits and blobs. This command defaults to returning the textual diff of commits, which makes it well suited for viewing code changes and reviewing patches within your repo.

We took a look at several formatting options, along with placeholders for customizing your output. We also discussed some of the ways you can customize the textual diff returned.

Although git log and git show are very similar tools, we demystified the overlapping capabilities of these two tools, and explained when one or the other is a more appropriate choice.

Using this command like a pro will enhance your understanding of Git and version control, and might impress some friends along the way!